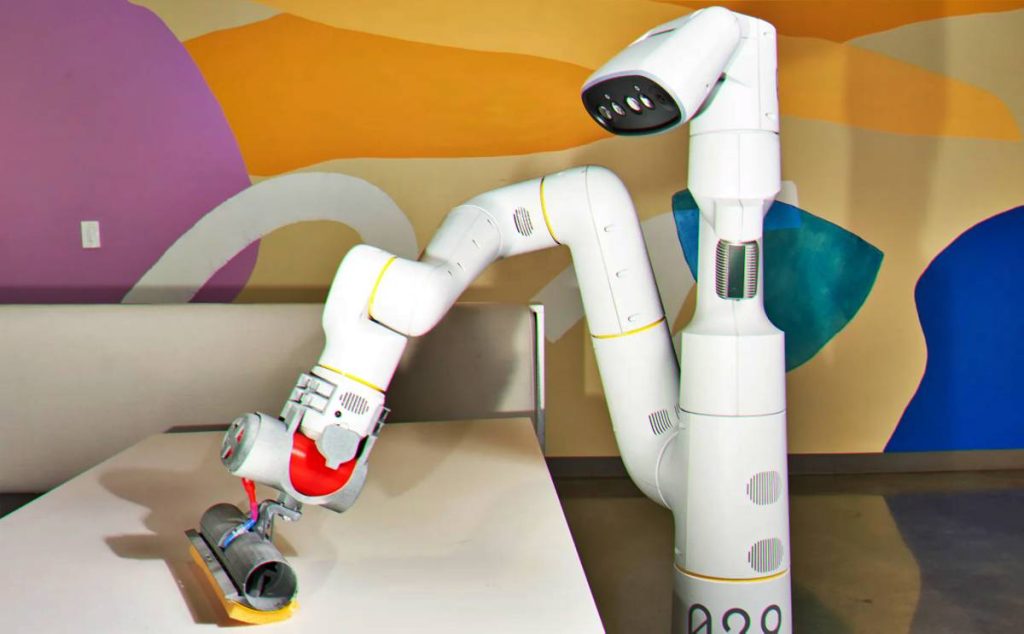 Hello Guys welcome to GadgetsPrime with due respect today in this article we are talking about Google’s Surprising Step: Addition of AI Language Skills In Robots. Robots continued to develop and can now be found in homes as toys, vacuums, and as programmable pets. Today robots are a part of many aspects of industry, medicine, science, space exploration, construction, food packaging and are even used to perform surgery.

A basic typical robot has a movable physical structure, a motor of some sort, a sensor system, a power supply and a computer “brain” that controls all of these elements. Essentially, robots are human-made versions of animal life  they are machines that replicate human and animal behavior.

Currently, the field of robotics is transforming and evolving at a very fast pace. Contemporary robots are currently being used to do the jobs which were dangerous, dirty or boring. From painting to welding, robots are being used in industries like automobile at a very large scale.

According to The Verge, since 2019, Alphabet has been developing robots that can carry out simple tasks like fetching drinks and cleaning surfaces.

This Everyday Robots project is still in its infancy — the robots are slow and hesitant — but the bots have now been given an upgrade: improved language understanding courtesy of Google’s large language model (LLM) PaLM.

Most robots only respond to short and simple instructions, like “bring me a bottle of water”. But LLMs like GPT-3 and Google’s MuM can better parse the intent behind more oblique commands.

Tech giant Google has now taken another step in robot’s future with artificial intelligence. And it started this by adding AI language skills to the company’s everyday helper robots so that they could understand humans.

Most robots only respond to short and simple instructions, like “bring me a bottle of water.” But LLMs like GPT-3 and Google’s MuM are able to better parse the intent behind more oblique commands.

In Google’s example, you might tell one of the Everyday Robots prototypes “I spilled my drink, can you help?” The robot filters this instruction through an internal list of possible actions and interprets it as “fetch me the sponge from the kitchen.”

Yes, it’s kind of a low bar for an “intelligent” robot, but it’s definitely still an improvement! What would be really smart would be if that robot saw you spill a drink, heard you shout “gah oh my god my stupid drink” and then helped out.

And 74 percent of the time, it would successfully execute on given instruction, and at the Google Robot Lab still, Research scientists are working on it to improve its understanding more precisely.

Besides, if you desire to know more about it, you can also check the official PDF from Google.

Also read this :  How to protect Windows 10 and 11 PCs from ransomware

What is the brain of robot?

Brain of a robot is the controller.

How many AI robots are there in the world?

According to data from a 2021 “World Robotics” report, the most current number of industrial robots in the world is estimated to be around three million

How is AI changing the world?

Modern Artificial Intelligence systems can capture and ‘understand’ their environment in real time; they can make optimal decisions, based on multiple signals, in milliseconds. With applications ranging from self-driving cars to healthcare, AI is already changing our world.

Why is a robot called a robot?

Robot is drawn from an old Church Slavonic word, robota, for “servitude,” “forced labor” or “drudgery.” The word, which also has cognates in German, Russian, Polish and Czech, was a product of the central European system of serfdom by which a tenant’s rent was paid for in forced labor or service

If you’d like to dig into our content, the best way to start is to join our newsletters, where you’ll regularly receive highlights customized to your interests.